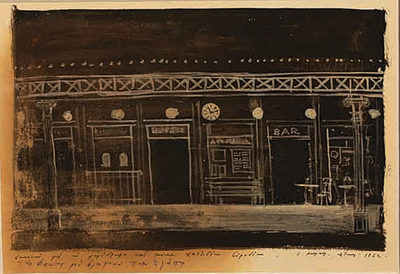 B. Eurydice
egg tempera on cardboard


Gift by the artist to the present owner

Yiannis Moralis was born in Arta in 1916. His family moved to Athens in 1927 and in 1931 he enrolled at The School of Fine Arts, Athens, where he studied painting under Constantinos Parthenis and Umbertos Argyros. On graduating in 1936 he received a grant to study in Rome for a year. He later moved to Paris and attended painting and fresco classes at the École des Beaux Arts and mosaic classes at the École des Arts et Métiers. In 1939, at the start of the Second World War, Moralis returned to Greece and joined the army forces. He first participated in an exhibition was in 1940. Numerous other exhibitions followed both nationally and internationally. In 1947 he began teaching at The School of Fine Arts, Athens and continued to do so until his retirement in 1983. In 1949 he formed ‘Armos’, a group with other artists including: Nikos Hadjikyriakos-Ghikas, Yannis Tsarouchis, Nikos Nikolaou, Nikos Engonopoulos and Panayiotis Tetsis. ‘Armos’ held its first exhibition in 1950 at Zappeion, Athens. From the 1950s onwards, he moved into a geometric style incorporating curved form, moving on from the realistic figurative depictions of his early work.   Over the course of his career, Moralis was also involved in theatre sets and costume design for the Greek National Theatre and the Greek National Ballet. He also decorated architecture such as the façade of the Athens Hilton, the Metro Station ‘Panepistimiou’ and Athens Central Station. He had been named Commander of the Royal Order of the Phoenix in 1965 and of the Order of Honour in 1999.   His work can be found at The National Gallery, Greece, The Municipal Gallery, Athens, The Municipal Gallery, Rhodes, The Leventis Gallery, The Averoff Gallery, The Vorres Museum, The Benaki Museum and many other public and private collections.
KASTORIA MANSIONS