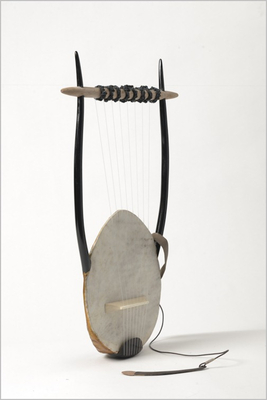 NOTES
This is an instrument, which according to mythology, was invented by the god Hermes, son of Zeus and Maea. The lyra was the most popular instrument in ancient times. It was used to teach young people and it was admired in particular because it was the instrument most directly associated with the worship of the god Apollo.
It underwent several phases in the course of its development. The shell of the tortoise (both sea tortoise and land tortoise) was used as the sound box of the lyra. There were also references regarding shell replicas made of dug-up wood. The arms consisted of a pair of horns or tree branches usually in vertical or arched position.
The string holder is usually made of wood but string holders made of bronze are also known to have existed in the form of a “Π”, attached to the back of the shell.