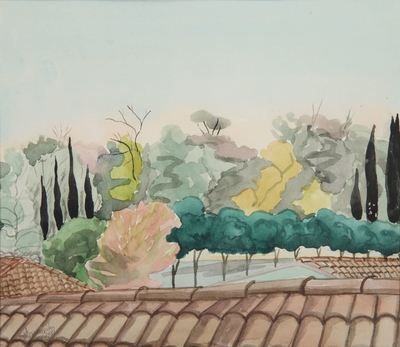 View from a rooftop, Nicosia & Cypriot landscape
watercolour on paper (2 )


private collection, Nicosia
(acquired directly from the artist by the present owner)

Michael Michaelides was born in Nicosia in 1923. He studied architecture and fine art in Italy and England. He has lived in London since 1955, working as an architect and artist.

His early paintings are figurative and relate to the ethnographic world of Cyprus. The figurative element is gradually abandoned through abstractive processes and gives way to juxtapositions of colour and line which from 1964 onwards lead him to his relief geometric and rhythmic structures.

He has been represented by the internationally renowned London art dealer Annely Juda since 1963. He represented Greece in the 1976 Venice Biennale. He has shown work in over 40 solo exhibitions and taken part in more than 80 group exhibitions in London, Belfast, Dublin, Oxford, Rome, Milan, Turin, Paris, Zurich, Amsterdam, Salzburg, Athens, Thessaloniki, Nicosia.