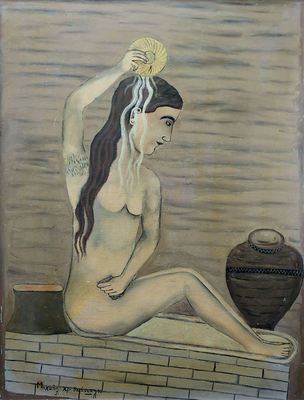 
from the collection of a prominent Cypriot lawyer involved with the Cyprus ethnarchy in Greece based and practicing in Athens together with his brother. He acquired the painting directly from the artist. Purchased by the present owner before 2010 from the estate.
Note
This painting by Michael Kashalos is one of the earlier works of a single figure unlike his later works where he often composed complex scenes with multiple figures and traditional themes. The work is one of the same period as the painting Woman Spinning which was sold at The Iakovos Georgiades Collection Auction in April 2010 and which had been exhibited in Kashalos’s first solo exhibition in 1960 at Gallery Apofasis, a cultural centre founded by Christoforos Savva and Glynn Hughes