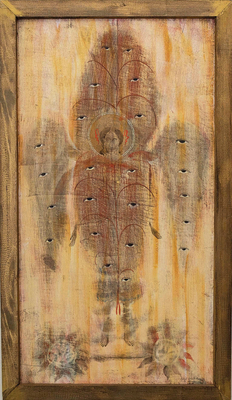 Merab Guramovich ABRAMISHVILI (1957-2006) Abramishvili was born in Tbilisi the capital of Georgia. In 1975 he attended the Tbilisi State Academy of Arts from where he graduated in 1981. The peculiar, unique style of Merab Abramishvili was born in the organic fusion of two artistic directions - Georgian fresco and Persian miniature which were introduced to him by his father, Guram Abramishvili, an expert in Georgian medieval art at the Art Museum of Georgia. Merab took part in a scientific expedition organized to study the frescoes of the Ateni Zion temple (the Temple of the Assumption of the Virgin in the village of Ateni, near the city of Gori in Georgia, built in the 7th century). This expedition was led by Merab's father, Guram Abramishvili, art critic and Ph.D. The expedition greatly influenced the formation of his personality. Impressed by the medieval frescoes from the Ateti Sioni Church, the artist adopted the gesso technique in his paintings. Due to his unique visual language and aesthetics, Abramishvili is recognized as one of the most original artists to emerge from the post-Soviet era who went beyond the established Soviet-era clichés. In the period of post-Soviet political instability, Abramishvili became preoccupied with mystical imagery. His works have been exhibited as part of numerous solo and group exhibitions in both Georgia and abroad including Cyprus. His paintings can be found at the Art Museum of Georgia and National Gallery of Art in Tbilisi, the Museum Ludwig, Cologne, and private collections worldwide.
Merab Guramovich ABRAMISHVILI