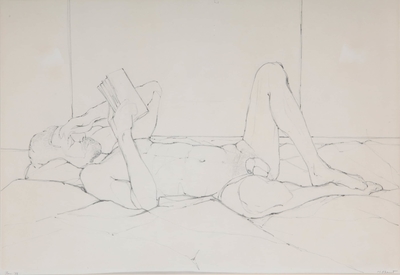 Mary Plant was born in Famagusta.

She studied painting at the Chelsea School of Art, London between 1976 and 1981.

Her work is largely abstract with an emphasis on geometric form. These forms are not merely decorative but symbolic references to rich Cypriot tradition and history. She is interested in surface texture and often works on panel exploring use of colour and incisions.

Additionally she participated in a number of group exhibitions such as in 1978 and 1981 at The Royal Academy of Arts, London; The Trent Polytechnic, Trent in 1981; The Camden Arts Centre, London in 1984; The North London Polytechnic, London in 1987 and The Commonwealth Institute, London in 1990 and 1991.

Works of Mary Plant form part of renowned public and private collections such as that of The State Gallery of Contemporary Cypriot Art.
KESSARIS