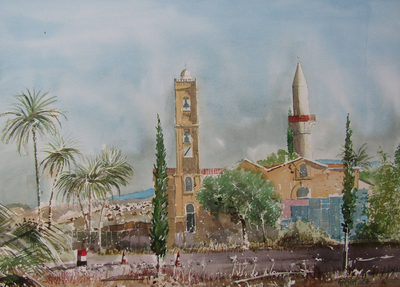 Martin Giesen was born in 1945 in Germany. Martin Giesen started to paint at age 15. After school he studied art history at Heidelberg University. For a year (1970-71) he interned at the Metropolitan Museum of Art in New York followed by completion of a PhD (Universität Heidelberg 1973). Giesen, a husband and father, entered into a career of university teaching. He has taught history of art and architecture in Lebanon (AUB 1973-85), Saudi Arabia, Canada, and since 1997 in the United Arab Emirates, where he was founding dean of the School of Architecture & Design at the American University of Sharjah. For some 40 years, Giesen has produced and exhibited watercolour paintings documenting the impact of development on the environment. His paintings produced in Lebanon during the years of the civil war received critical acclaim. Giesen is now retired and lives on the island of Cyprus. Work has been shown in solo exhibitions in Lebanon, Germany, Canada, and the United Arab Emirates. David Tannous, Washington corresponding editor for Art in America, called Giesen a “contemporary orientalist”. John Munro and Samir Sayegh authored monographs, published in 1984 and 1995, on Giesen’s Lebanese watercolours. “Martin Giesen’s watercolours have been achieving high prices at auctions in the last few years.”
SENUFO DOOR Ivory Coast