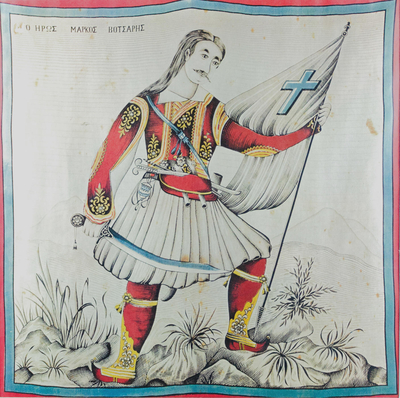 
From the estate of the Greek artist Sofia Laskaridou (1882 – 1965)
Private collection, Greece

Markos Botsaris is one of the most important personalities of the Greek Revolution of 1821. The Souliotis chief took part in the battles of Plaka in 1821 and Peta in 1822. He was among the defenders of Messolonghi in its first siege at the end of 1822 where, by misleading the enemy into false negotiations, he gave the besieged time to fortify their fortifications. On Christmas night 1822, Botsaris with a few men defended the wall of the city of Messolonghi resisting the troops of Omer Vryonis. He died on the 9th of August 1823 in Kefalovrisso outside Karpenisi, trying to stop the advance of the enemy together with Kitsos Tzavelas and other Souliotes.
Charles Lock EASTLAKE