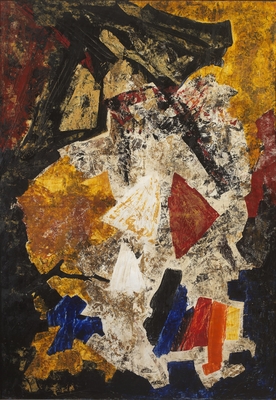 Hatzigaki was born in Volos and studied painting with K. Iliades, between 1956 and 1960. After a brief period of experimenting with a more traditional painting language she turned to abstract expressionism and non-figurative art, creating significant works in the 1960’s and 1970’s where beauty, colour and poetry merge harmoniously. Hatzigaki presented her work in many solo National and International shows, such as in 1955 at Pein Gallery, in 1959 at Zygos Gallery, in 1962 and 1971 at Nees Morfes, in 1965 at the ‘Centre of Adult Education’ Boston, USA and in 1977 at the ‘Gallery of World Art’, Newton Center, USA. She held a large number of International group shows. Just to name a few: In 1959 and 1960 at the Musée d’Art Moderne, Paris, in 1961 at the Tunis Biennale, in 1962 at the Bezalel National Art Museum, Jerusalem, in 1963 at the Alexandria Biennale, in 1968 at the Exhibition of Contemporary European Artists, New York, in 1969 and 1971 at the Salon de la Jeune Peinture, Paris, in 1972 at the Buenos Aires Print Biennale and in 1979 at UNESCO, Paris. After her death her husband, Panayiotis Hatzigakis, donated 650 works to the Athens Academy. Maria Hatzigaki together with her sister Eleni Zerva, pioneered, as of the late fifties, in the abstract expressionism movement in Greece, and exhibited alongside the likes of Yiannis Spyropoulos and Alecos Condopoulos. Her work can be found in The National Gallery of Greece, The Municipal Gallery of Athens, The Greek Ministry of Education and many public and private collections.
Renos LOIZOU