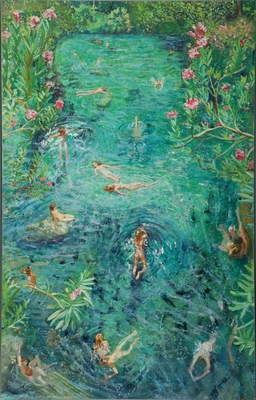 Filopoulou was born in Athens, and studied painting in Paris at the École Nationale Supérieure des Beaux-Arts under Leonardo Cremonini, between 1984 and 1988. The following year she continued with postgraduate studies at the same school, on a schol¬ar¬ship from the French Government. She exhibited her work extensively in Greece and abroad in countries such as London, Paris and New York. Her works are to be found in the National Gallery, Athens, The Greek Parliament, and in private museums and collections in Greece and abroad. Daniel Sibony noted in the catalogue of the 2006 exhibition that included the work Ancient pool, Hierapolis IV: “Through the painted objects-the bodies enjoying the water-Filopoulou is personally involved, diving in this playful element. She too intimately enjoys the sheer physicality of the gleaming bodies. Maria Filopoulou loves painting, and loves herself as a painter; she has a unique relationship with the sea. She adores it and fills it with pearl-fleshed bodies that echo her enthusiasm. Her seas are full of splendour, light and luminosity, populated by fragile iridescent sea creatures, which transform her into another entity; she becomes one with the water, and the water becomes one with her, and she emerges to paint the experience.”
Thalia FLORA-KARAVIA