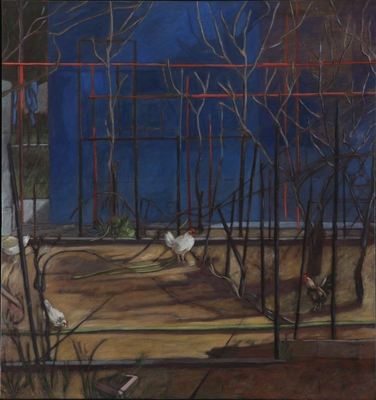 Courtyard with hen
acrylic on wood

Marcos Kampanis was born in Athens in 1955 and studied painting in London.

He is a painter and a printmaker. He has also worked as a book illustrator and has created many murals, mainly church commissions.

He has shown his work in seventeen one man shows and many group exhibitions in Greece and internationally. Major one man exhibitions were hosted at The Byzantine Museum in Athens and The Cultural Foundation of The National Bank of Greece.

His work can be found in the collections of The Vorres Museum, The Pierides collection, The Alpha Bank collection, The Byzantine Museum in Athens and The Cultural Foundation of The National Bank of Greece.
KESSARIS