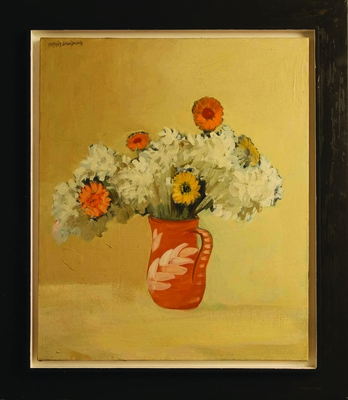 Manolis Calliyannis was born on the island of Lesbos in 1923 where he lived until 1940. During the Second World War he volunteered and served with The Royal Air Force and later with The Hellenic Air force. After the war he studied architecture at The Witwatersrand University, Johannesburg between 1945 and 1948, whilst painting in his spare time. In 1948 he had his first solo exhibition in Johannesburg at The Constantia Galleries. Following his great passion for art, in 1949 he terminated his studies and moved to Paris where he dedicated himself to painting. His first works, influenced by the Paris movement of the time, move in the sphere of abstract expressionism. Abstract works in restrained and sober colours made his reputation in Europe and the USA. In 1955 he regularly visited Lesbos and painted many landscapes of Greece, as well as some figurative pictures with abstractive tendencies. In 1960 he moved from Paris to a village near Nice. In 1978 he returned to Greece and managed The Teriade Library and Museum in Lesbos. He remained in Greece until his death in 2010.
Maria RAMFOU