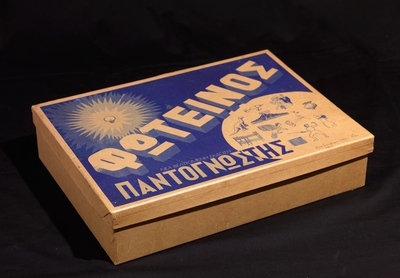 Lina Bebi was born in Athens in 1957. She studied painting and engraving at The School of Fine Arts, Athens. Lina Babi invites the spectator to personally engage with her art. This can be seen in Παντογνωστης. She re-works a familiar childhood game from memory into an adult version. The words are such that the player analyses his/her own existence. Bebi has presented her work in a number of group and solo exhibitions in Greece and abroad. Her works can be found in numerous public and private collections in Greece and abroad, notably: The Macedonian Museum of Contemporary Art, The Emfietzoglou Collection, The Vorres Museum and The Sharjah Museum of Modern Art.
Nikolaos SANTORINAIOS