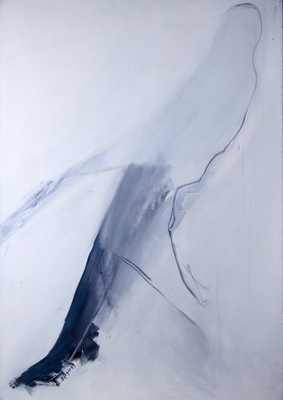 NOTES Lefteris Olympios was born in Limassol, Cyprus. He studied at The School of Fine Arts, Athens from 1978 to 1984: he studied painting, icon-painting and fresco. He continued his studies at The Free Academy of Fine Arts, The Hague from 1984 to 1986. He lives and works in Amsterdam. Olympios has exhibited extensively in The Netherlands, Greece and Cyprus. In 1997 he represented Cyprus at The 47th Venice Biennale with the series ‘Philoxenia’. In 2012 The Byzantine and Christian Museum, Athens organised a retrospective of his work titled 'Facing Byzantium'. His work can be found in many public and private collections in Cyprus, Greece and The Netherlands. Notably: The State Gallery of Contemporary Cypriot Art and The Nicos Pattichis Collection.
Lefteris OLYMPIOS