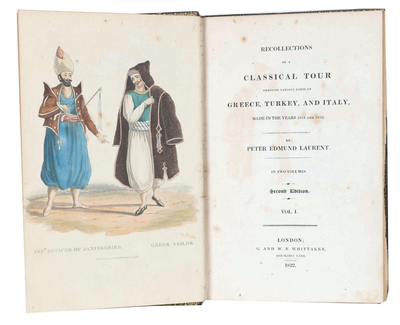 Recollections of a Classical Tour through the various parts of Greece, Turkey, and Italy made in the years 1818 and 1819

Peter Edmund LAURENT was a classical scholar, born in 1796, was a native of Picardy in France, and studied at the Polytechnic School at Paris, where he gained several prizes. He came to England at an early age and was engaged for several years as a teacher of modern languages in the university of Oxford. He was also French master at the Royal Naval College, Portsmouth. He was a good mathematician and is stated to have spoken fluently nearly all the European languages, and to have been well versed in Arabic, Latin, and Greek. In 1818 he left Oxford with two university friends and visited the towns of northern Italy. Starting from Venice on 9 July 1818 he visited Greece and the Ionian Islands, and came home in 1819 through Naples, Rome, and Florence. In 1821 he published an account of his travels as 'Recollections of a Classical Tour'.
Colonel Bernard Eugene Antoine ROTTIERS