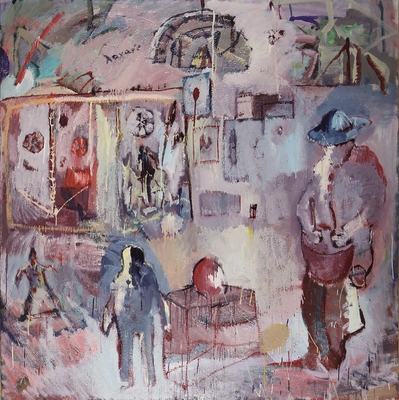 Giorgos Lanaras was born in Athens in 1962. He studied painting at the Academy Of Fine Arts in Athens (1982-87). In 1986 with an interstate exchange program, he continued his studies at the Royal College of Art in London. In 1990 he held his first solo exhibition at Titanium Gallery, which was followed by a numerous group and solo exhibitions in Greece and internationally, at galleries such as Gallery K, London in 1991, Olga Georgadea Gallery, Athens in 1994 and Titanium Gallery 1993, 1997 and so on. Lanaras in 1990 participated in the group exhibition “Reference to Bouzianis” organized by The Municipal Art gallery of Athens and in 1996-97 in the group exhibition “Teachers and Students” that was presented at The Astrolavos Gallery, Athens and at The Metamorphosis Gallery, Thessaloniki. Giorgos Lanaras balances the sanctity of representation and the horror of grotesque. We are loaded with symbols and a number of heterogeneous forms that interact with each other in the traditional three-dimensional space. The cries of all beings seem even louder because of the synthetic resins and duco oil paints he uses, so that laughter becomes a sob or a scream. The painting of Lanaras, as established in the last decade, is defined as 'conceptual expressionism’ or more analytically as ‘the terms of human tragedy expressed as a comedy'.
Yannis MESSINIS