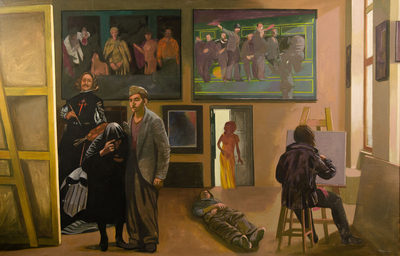 Influences of Velasquez
oil on canvas

NOTES Kyriakos Katzourakis was born in Athens in 1944. He studied painting at the Athens School of Fine Arts (1963-1968) with Yannis Moralis as a teacher and scenography at the workshop of Vassilis Vassiliadis. In 1969 he was awarded the "Parthenis" painting prize. From 1972 to 1986 he lived in London where between 1973 and 1975 he studied printmaking at Saint Martins College of Art and Design and Croydon College of Art. In the cinema he directed many films including “The way to the west”, “Sweet memory”, “Small revolts” amongst others, and in the theatre he created the costumes for the theatrical performance "Days of '36" by Theodoros Angelopoulos (1972) and stage designs for various plays. He was a founding member of the group “5 New Greek Realists” (1969-1972) together with Yiannis Valavanidis, Chronis Botsoglou, Jannis Psychopedis and Cleopatra Digkas. In 1990 he founded the Art Group, as well as the Union of Artists "Europa 24" (1991-1998). NOTES Kyriakos Katzourakis was born in Athens in 1944. In 2005 he was elected full professor at the School of Fine Arts of the Aristotelio University of Thessaloniki, where he taught until 2012. His works can be found in public and private collections.
Spyros VASSILIOU