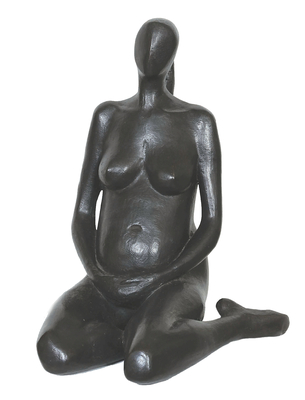 NOTE An exhibition titled Maternity was organised in 1999, by Gallery K Cultural Events in aid of the Fetal Medicine Foundation. The participating artists worked on the theme of Maternity. Two of the artists, Edward Bell and George Kyriacou, had the opportunity to work from life, thanks to Prof. Nicolaides who arranged for one of his patients from King’s College Hospital to pose for the artists, journalist Katy Bravery. All ten participating artists approached the subject from different angles and their work varied as well as their statements which can be seen in a catalogue, titled Maternity 1999, especially published for the exhibition, with an introduction by Katy BraveryGeorge Kyriacou was an elementary school teacher for two years before going on to study sculpture at Chelsea School of Art in London from 1961 to 1964. From the time he graduated until 1969 he worked as a secondary school art teacher. In 1969 he was appointed head of the arts sector of the Cultural Services of the Ministry of Education. Later, in 1972, he moved to Paris to study museology at La Sorbonne on a scholarship from The French government. He then studied at the Central London Polytechnic (1976-1977), where he obtained a Diploma in Arts and Leisure Administration. Kyriacou held his first solo exhibition at the Hilton Hotel, Nicosia in 1969. Since 1964 he has participated in numerous group and solo exhibitions in Cyprus and abroad. Notably, the 1967 Paris Biennale des Jeunes, the1968 Venice Biennale, the 1968 Alexandria Biennale, Ora Gallery, Athens in 1970, Athenaeum Gallery, Madrid in 1971, Gallery K, London from 1991 to1999 and The London Contemporary art Fair in 1993 and 1995. Since 1965 he has received many important commissions for public monuments in Cyprus. Among them: the M. Parides monument, Larnaca, 1966, the M. Savva monument, Akaki, 1967, the V. Michaeledes monument, Lefkoniko, 1968 and the Monument to the Unknown Policeman, 1970. He was also a pioneer in placing art on buildings such as a coloured relief for the new Lyceum building in Larnaca, 1969 and a bronze relief for the Yiorkion building complex in Nicosia, 1996. In 1972, he won the Panhellenic competition for the monument to EOKA hero Gregoris P. Afxentiou at Makheras. The monument was completed and unveiled on the 40th anniversary of the hero’s death in 1997. His works can be found in numerous public and private collections in Greece and abroad, notably The State Gallery of Contemporary Cypriot Art and The Bank of Cyprus Cultural Centre Foundation.
Demetris CONSTANTINOU