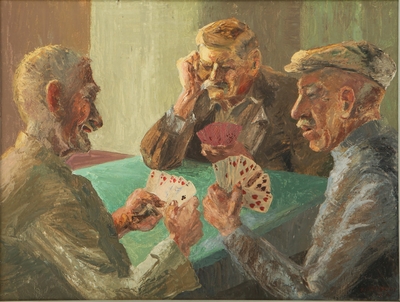 Kostas Averkiou was a self-taught painter and engraver. After finishing primary school Averkiou worked as a carpenter alongside his father, developing relevant skills for his career that followed as an artist. In 1945 he set up his own workshop in Nicosia. He worked mainly as a sign-maker and designer of commercial posters. Averkiou devoted much of his time to oil-painting and engraving, the latter of which he learnt from Telemachos Kanthos. By 1957 he was considered a well-respected engraver. Averkiou exhibited his work in a number of solo exhibitions which included shows in 1971 in Athens and in 1972 in Nicosia. Additionally he participated in numerous group exhibitions, such as: The Pancyprian Art Exhibition, 1947, Apophasis Gallery, 1955 and 1956, The VI International Moscow Festival, 1957(where he was awarded second prize), The Exhibition of Eighteen Cypriot Artists, Athens, 1962 and The 1963 Alexandria Biennale and The 1972 Venice Biennale. His work can be found in a numerous public collections such as: The State Gallery of Contemporary Cypriot Art, The Bank of Cyprus Cultural Centre Foundation, The Leventis Gallery, the Archbishop Makarios III Cultural Centre Foundation and so on.
Gaitis wood construction