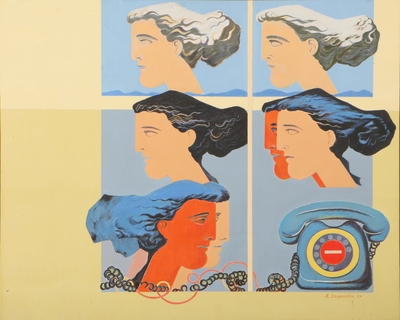 Composition I
acrylic on canvas

Katy Stefanides was born in Limassol in 1925. Between 1948 and 1955 she studied at The Higher School of Fine Arts, Athens under Yannis Moralis. Later, between 1956 and 1960, she continued her studies at St. Martin’s School of Art in London. She worked as a secondary school art teacher in Cyprus. She was married to painter and writer Tassos Stephanides. Her contact with the modernist currents that flourished in Europe during the 50s and 60s not only freed the creative horizon of Stephanides, but brought her to the heart of her artistic pursuits. From the first sketches to Op-Art, from cubism to constructivism and abstract geometric painting, by combining the abstract with the figurative to still life and metaphysical allegory, this influence is prominent. Stephanides’ had several solo exhibitions: in 1972 at Acropoli Gallery, Nicosia; in 1978 at Zygos Gallery; in 1982 at Gloria Gallery; in 1989 at Morphi Gallery, Limassol; in 1990 at Apocalypse Gallery, Nicosia; in 1991 at Bedfordshire, London and in 1994 at The Athens Exhibition Centre, Athens. She participated in many group exhibitions: in 1961 in ‘Cypriot Artists’ at Vayianou Gallery, Athens; in 1963 at the Biennale of Alexandria; in 1970 at the Commonwealth Institute in London, Edinburgh and at the exhibition ‘Contemporary Cypriot Art’ at Ora Gallery, Athens; in 1971 at the Sao Paulo Biennale, Brazil and at the Art Exhibition, Yugoslavia; in 1973 at the exhibition ‘10 Artists-Art Symposium’, Nicosia; in 1974 in ‘Cyprus, the Sun-kissed Island of Aphrodite’ exhibition, Hamburg; in 1975 at the Panhellenic Exhibition; in 1979 at the Exhibition of Contemporary Cypriot Art, Thessaloniki; in 1981 at the touring exhibition of Contemporary Cypriot Art, Budapest, Prague, Belgrade, Bucharest, Sofia and Suhl of Germany; in 1983 in Paris; in 1987 in Athens; in 1988 in Brisbane of Australia; in 1994 at the ‘Cyprus 1960-1994’ exhibition, Athens Exhibition Centre and in 1995 at the ‘Cyprus Contemporary Art, An Itinerary’, Nicosia. Her work can be seen at: The State Gallery of Contemporary Cypriot Art, The Bank of Cyprus Cultural Centre Foundation, The Limassol Municipal Gallery, The Archbishop Makarios III Foundation-Cultural Centre, The Thessaloniki University, The National Bank of Greece, The Andros Gallery and in several private collections in Greece, Cyprus and the United Kingdom.
Tassos STEPHANIDES