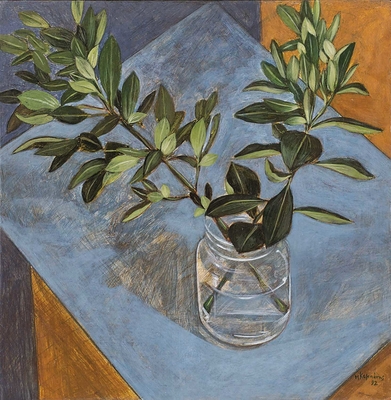 Vase with leaves in blue I, II, III & IV
acrylic on wood

4 paintings sold as one lot.
Each signed and dated lower right 92
Each titled and dated on the reverse
(4 x) Each 31 x 31 cm

Markos Kambanis was born in Athens in 1955. He studied painting at St Martin’s School of Art in London, where he lived from 1974 to 1980. Markos Kampanis’ imagery is quintessentially Greek. The simple beauty of an olive oil grove, traditional island pottery, and the sparseness of a Greek interior are expressed through remarkable purity of form and clarity of colour and technique. Thus, imagery which is often ignored or perceived as mundane, acquires a new aura and sense of mystery as well as an identity which is authentically Greek in the traditional sense. Apart from his painting he has worked as a print-maker, icon painter and book illustrator. He has executed murals and ceiling decoration at the monastery of Simonos Petra on Mount Athos. Marcos Kampanis has shown his work in seventeen one man shows and many group exhibitions in Greece and internationally. Major one man exhibitions were hosted at The Byzantine Museum in Athens and The Cultural Foundation of The National Bank of Greece.
Zoe ZENGELIS