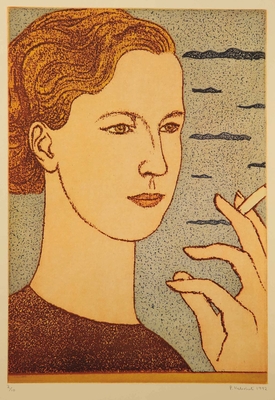 
collection of the artist
acquired by the present owner, London

Panayiotis Kalorkoti was born in Ayios Amvrosios, Cyprus, but soon moved with his family to Britain. He studied fine art in the University of Newcastle-upon-Tyne, and specialised in printmaking at The Royal College of Art, before working at The Dutch Royal Academy of Arts and crafts in Den Bosch with a special scholarship from the Dutch government. He has worked on major public projects, such as the Grizedale Society, Cumbria, has been ‘artist in residence’ for the Leeds Playhouse and for many other bodies and has won fellowships, scholarships and commissions. Roger Cardinal noted in the catalogue of the 1994, Gallery K exhibition: “Panayiotis Kalorkoti’s etchings have a characteristic tonality, a colour reminiscent of old brickwood warmed by a dying sun, something between faded pink and a rusty burgundy, where nostalgia mingles with a deeper pathos”. Kalorkoti’s early work, mainly prints, emit particular sensitivity, keen observation and enlightened, yet slightly melancholic skepticism, which is typical of those who have had, by choice or necessity, to settle in places and cultures that differ considerably from their native one. He has a track record of more than 15 solo exhibitions in famous state and privately owned spaces in Britain, The Netherlands, Greece and Cyprus and he has participated in major group shows in organisations such as The Royal Academy, The ICA, Whitworth Art Gallery, Barbican Arts Centre, Whitechapel Art Gallery, National Portrait Gallery and Museum of Modern Art, Oxford
Stathis LOGOTHETIS