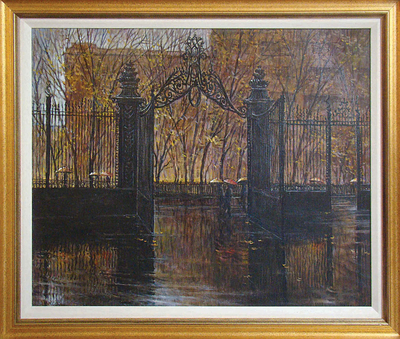 Vladimir Kachanov was born in 1945, a member of Moscow Union of Artists from 1974 and a member of Artists' Association "Zamoskvorecheye". He was a Doctor of Technical Sciences, professor of the Department of Electronic Devices, a leading scientist in the field of electronics and ultrasound device and became a professional artist. He considers the academician Gritsay, People' Artist of the USSR, to be his teacher. This artist works in a genre of cityscape and portraiture with striking realism. He thinks that the creation of the works of art is a method of exploring the surrounding world which is a continuous process. He is one of the few artists who paints from nature. It seems that he transfers the poetry and music of the Moscow landscape onto the canvas and invites us to enjoy the flow of the rhythm, colour and light. MOSCOW ROMANCE In April 1997 Gallery K in collaboration with the Russian embassy and the Sensus artist association organized an exhibition to celebrate Moscow 850th anniversary. This old ever young city was founded by Prince Jouri Dolgorukiy in 1147 and since then it has grown from a small town to one of the largest capitals in the world. It is an amazingly beautiful city, especially its old part, with its boulevards, streets, monasteries and churches that are wonderful in any season. The gold of the domes gave Moscow its famous name - ‘Golden’ or ‘Golden-domed’ City. Ability to notice this beauty and show it to a viewer is a major task of an artist. The exhibition titled ‘Moscow Romance’ presented a wide selection of works by six leading Moscow artists who work mainly in the style of urban realism. Their paintings provide a historical reference to the ‘new’ old town. Visionary, poetic and colourful oil paintings by internationally known and younger artists brought to mind forgotten associations and images of Moscow. In every painting one can feel love to the city that carries an enormous charge of positive energy accumulated by generations. Julia Galeeva
Vladimir KACHANOV