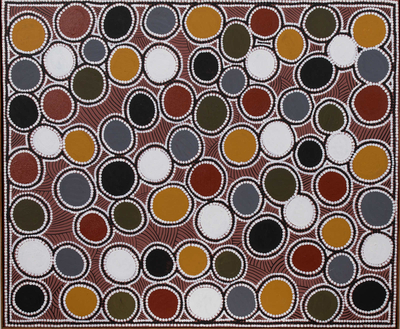 Artist’s description of the Waterholes Artworks:- “I have painted waterholes in my country at sunrise – to the north of Mantinea Flats near Kununurra, Western Australia. The flatlands have plenty of waterholes and after the wet, they fill right up. The waterholes are all different colours, just depends on what’s underneath them. Some are very salty because all this country used to be under seawater long time ago – they’re the white ones. The black, they’ve still got a bit of water in them but no good to drink. The yellow coloured ones are where the good water is, bit of sand but water ok. The green ones look pretty – they have water all year long from under the ground (natural spring water) and the sun makes the top of the water all green with leaves and bits of grass soaking in the water for a long time. This is a really good place for animals and bush tucker most of the year, and my mother and grandmother used to walk all around and lived off this land.” Ju Ju Wilson is of the Miriwoong people and her Aboriginal name is Burriwee. She was born in Kimberley, Western Australia. Apart from being an artist she is an expert in bush tucker, bush medicines and a much sought-after cultural advisor who has made numerous appearances on television regarding these topics. Her paintings and artifacts are collected worldwide.
Gideon Namardika DJORLOM