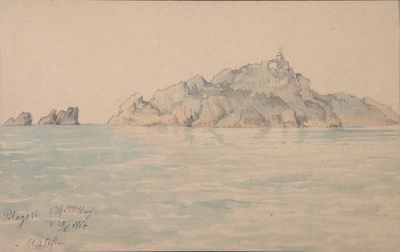 At a young age Joseph Hoffmann took drawing lessons, and at eighteen travelled with a friend of his father to Austria, Croatia and Serbia. On his return to Vienna, he joined the atelier of Carl Rahluntil 1852. In 1856 he travelled to Venice via Munich and Tyrol. The following year he travelled to Greece and in 1858 to Rome, where he stayed for six years. This was the time when Hoffman conceived the Ideal of the Greek landscape in paintings like: The remains of the sanctuary of Venus on the road to Eleysis, The Old Periclean Athens, Seen from the Gardens of the Queen and The grave of Anacreo. In 1864 Hoffmann returned to Vienna. From 1869 onwards he worked on stage sets for The New Vienna Court Opera, starting with Mozart’s The Magic Flute and later Weber’s The Marksman and Shakespeare’s Romeo and Juliet. Later in his career Hoffmann painted numerous landscape murals for the Palais Epstein in Vienna, the Castle Hernstein, the Kursalon in Vienna’s city park, and five paintings of ancient Athens for Baron Sina. In 1876 Hoffmann returned to decorating stage sets for the Bayreuth Festival and the Vienna Court Opera House. He also painted landscapes for the Natural History Museum in Vienna and murals for the parliament building.
Oumbertos ARGYROS