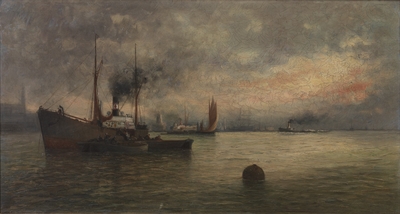 The Port of Copenhagen
oil on canvas

Altamoura was born in Florence, and was the third child of Eleni Boukoura and Saverio-Francesco Altamoura, both notable artists. After their marriage ended Boukoura moved to Athens in 1857 or 1859 with her three children. Jean was taught his first art lessons from his mother and in 1871 enrolled at The School of Fine Arts, Athens where he studied painting under Nikiforos Lytras. As an exceptional student Altamoura was awarded a scholarship by George I to study in Copenhagen at the Kongelige Danske Kustakademi, between 1873 and 1876, under the great seascape painter C.F. Soerensen. Altamoura’s great interest in seascapes became apparent early on. His subject matter and manner of his work are not only influenced by his teacher but also from the culture of Copenhagen and from his own temperament. In his work, Altamoura greatly masters the feeling of shifting atmosphere, the metaphysical luminosity of northern European and the mobility of light, despite his youth. Altamouras studied seascapes of the 17th century Dutch school, of the 18th century Italian school and generally the European tradition on the subject. By the age of twenty-four he was already an acclaimed artist enjoying the full support of the Greek Royal Court. In 1976, suffering from tuberculosis, he returned to his mother’s house on the island of Spetses where he eventually died two years later. The year he died two of his works were exhibited at the Exposition Universelle in Paris. During his time in Denmark, all sources refer to a very lively, charming and talented young man that left an impact through his work, as so with his early romantic death. His work can be found in The National Gallery of Greece, The Leventis Gallery, The Averoff Gallery, and many other public and private collections in Greece and internationally.
PAVLOS (Dionyssopoulos)