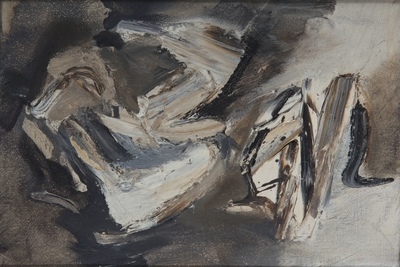 Molfessis was born in Athens in 1925.

In 1942 he enrolled at The School of Fine Arts, Athens, where he studied under Constantinos Parthenis, Dimitris Biskinis and Epaminondas Thomopoulos. He graduated in 1946. Simultaneously (from 1942 to 1944), he studied Law at the Aristotle University, Athens.

He then studied the Byzantine Art of Northern Greece whilst serving in the army.

In 1950 he moved to Paris where he studied fresco at École Nationale Supérieure des Beaux-Arts.

From 1950 to 1970 Molfessis’ worked mainly in the medium of painting. He begun with figurative and landscape themes and then proceeded into abstraction, using a restricted palette of mainly whites and blacks, grays and ochre. The work of this period is quite dramatic and characterised by lyricism and expressionism.

From 1960 onwards he was influenced by technological advances in the field of computing and incorporated this into his work, making him a creative pioneer worldwide.

From 1968 onwards Molfessis started to focus more on sculpture. He created large scale public commissions in Paris and other French cities. He used cement and various mineral metals to create 3D works that investigate the relationship between the solid and the void, light and shade, rough and smooth surfaces and varying depth levels.

He has exhibited in many solo and group exhibitions internationally. Just to name a few: The 1952 Exposition Internationale, Paris, the 1954 Salon d’Automne, Paris, at Musée de la Ville de Paris in 1955, at Cincinatti Art Museum in 1956, in ‘Peintres et Sculpteurs Grecs de Paris’, Musée d’Art Moderne, Paris in 1962 and the 1963 Sao Paolo Biennale and so on.

Molfessis lived in Paris until 1988. He then returned to Athens as he was appointed as a professor at The School of Fine art, Athens. In 1990 he retired and moved to Paris, frequently visiting Greece until his death in 2009.