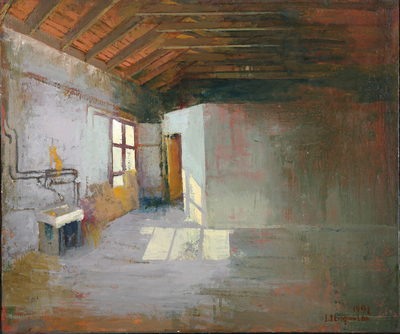 Irene Iliopoulou studied Greek literature at the University of Athens, and then painting at The School of Fine Arts, Athens under Giorgos Mavroidis.

Together with Stefanos Daskalakis, Giorgos Rorris, Edouard Sacaillan and Maria Filipoulou she formed an informal art group advocating a ‘return to paintability’.

‘The painter instructs and cultivates the eye, which functions in her work as verbal energy. This verbal energy with which the viewer begins to search and trace the forms becomes an adjectival attribute for each depicted image (drawing qualities from the structural context in which it operates), to arrive at the essence of object recognition. This takes place conditionally since nothing ensures with finality its identity; although lliopoulou’s pictorial space may be recognisable, it is always enigmatic.

The light, nuances, hues, texture, the subterranean or otherwise dazzling glow, the emphasis mainly on events surrounding the "subject" and the narration contained in the image, the atmosphere with its evocative mystery and moods, as well as the doubts undermining the familiar and secure, all enrich the enigmatic quality of each picture. Despite this, the image never forsakes its verisimilitude. In fact, one could say that the verisimilitude is chosen for its cogency, analogous to the metaphor in poetry.

She exhibited her work extensively in Greece and overseas in countries such as France and Belgium.

Her work can be found in The National Gallery, Athens, in private museums and in private collections in Greece and internationally.
Rhea BAILEY