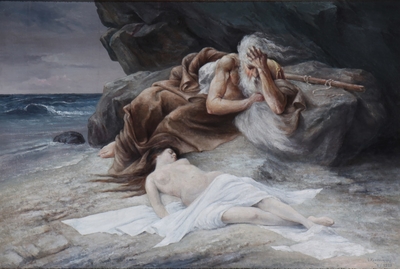 Kreontas and Antigone
oil on canvas


private collection, Limassol
(given as a present by the artist to the father of the present owner)

Ioannis Kissonergis was born in Nicosia in 1889. His father, Periklis Kissonergis was a school teacher, chief cantor at Phaneromeni Church and a teacher of Byzantine music - a broadly cultured personality. After graduating from the Pancyprian Gymnasium in 1907, he moved to Athens where he studied medicine for three years. During the Balkan wars, between 1912 and 1913, he served as a volunteer doctor for the Greek Red Cross in Thessaloniki. At the end of the war he ceased his medical studies and enrolled at The School of Fine Arts, Athens. After studying for one and a half years he became ill with tuberculosis and was forced to give up his studies, due to a law at the time which forbade students with tuberculosis to attend university. He returned to Cyprus and for the twelve years that followed worked as an art teacher at the Pancyprian Gymnasium. Unfortunately in 1935 he was forced to resign because of a new regulation that demanded all teachers be university graduates. He was immediately re-employed by the English School in Nicosia, where he taught until 1952. He introduced life class, drawing and painting from nature and gave his students the exercise of copying works of important European painters. Kissonergis was the artist most frequently on show at the ‘Cyprus Art Exhibition’ organised from 1931 onwards, initiated by the then British Governor Sir Roland Storrs. These shows continued until 1939 and constituted the first organised effort promoting Cypriot art. He held his first solo exhibition in 1952 followed by his second the following year, before immigrating to South Africa with his daughter and son-in-law, where he lived until his death, in 1963. Kissonergis copied paintings which were fashionable in order to satisfy the demand of a newly established urban class. He also painted icons. He painted the central dome and half dome of the Holy of Holies of Phaneromeni church, Nicosia and also the iconostasis of Ayia Triada church, Durban, South Africa, in a naturalistic manner influenced in spirit by western religious art. During the time he studied in Athens Kissonergis’ teachers were Georgios Iacovides, Georgios Roilos, Spyros Vikatos and Demetrios Geraniotis, all artists of the Munich Art School. This influence can be seen in his masterly executed work, in its academic, technically sound and detailed manner. Of which the painting in this lot is a prime example. Most of Kissonergis’ work is not dated, making Kreontas and Antigone particularly exceptional in that it bears the date: 1925. Kissonergis lived in a time when the art sector was almost non-existent and the public was totally ignorant of it. The traditional middle class was a small community, meaning the people who bought art were very few. Kissonergis’ contribution in educating the public in art was immeasurable. He is a father of contemporary Cypriot Art and his contribution to its evolution is considerable. His work can be found in many public and private collections in Cyprus. Notably at The State Gallery of Contemporary Cypriot Art, The Nicosia Municipality Collection, The Leventis Gallery, The Bank of Cyprus Cultural Centre and The Central Bank of Cyprus Art Collection.
Oumbertos ARGYROS