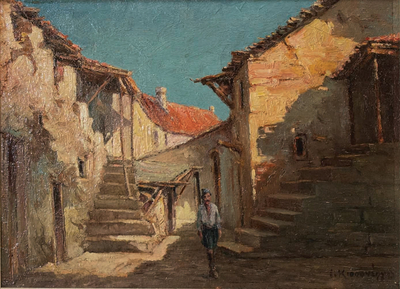 Ioannis Kissonerghis was born in Nicosia in 1889 and died in Johannesburg in 1963. After his graduation from the Pancyprian Gymnasium, he went to Athens where he studied medicine for three years. He ended his studies to work as a volunteer doctor for the Greek Red Cross in Thessaloniki during the Balkan Wars (1912-13). Upon his return from the war he decided not to continue his studies at the Medicine School and instead enrolled to study at the Higher School of Fines Arts in Athens. During the period of his studies he worked at the newspapers “Chronos” and “Estia” as a drawing artist. He was forced to stop his studies, just after a year and a half when he became ill with tuberculosis. He returned to Cyprus where he started working as an art teacher at the Pancyprian Gymnasium. The lack of a diploma forces him to resign from the Pancyprian Gymnasium, but he continues teaching at the English School in Nicosia from 1936 till 1952. As an art teacher he introduced to his students the free drawing and painting from nature. He also brought his students in contact with the work of significant painters. He contributed to the evolution of Cypriot contemporary art as a painter and teacher. He is considered as one of the fathers of Cypriot contemporary art. Besides his original painting skills, he used to copy paintings which were fashionable at that time to please the demands of urban class. He also used to paint icons. He had painted part of the central dome and semi-dome of the Holy of Holies of Phaneromeni Church in Nicosia, and the iconostasis of the Ayia Triada Church in Durban, in a realistic manner with influences from Renaissance. He was the artist with the most participations at the annual Cypriot Artistic Exhibition, which was established by the colonial government in 1931. He took part in the exhibitions of 1931, 1932, 1933, 1934, 1935, 1937, 1938 and 1947. His first one-man exhibition was presented in 1952 at “Pnevmatiki Adelfotis” in Nicosia. The Greek Pnevmatikos Group in Cyprus organized his second one-man exhibition in 1953 at the Nicosia Club. Bibliography: I. Kissonergis, Bank of Cyprus Cultural Centre publications, Nicosia 1993 - Eleni Nikita, Cypriot Artists, First Generation, Cultural Centre of Popular Bank, Nicosia 2002 - Christos Savvidis-Trichas, Cypriot Artists, Chr. Andreou publications, Nicosia 1982-83 - Eleni Papademetriou, State Gallery of Contemporary Cypriot Art, Ministry of Education and Culture, Cultural Services, Nicosia 1998.
Andreas MAKARIOU