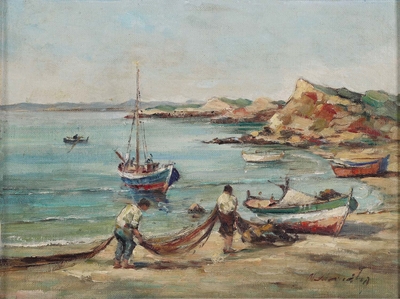 Gathering the fishing nets
oil on board

Victor Ioannides was born in Limassol in 1903 and died in 1984. He studied at the Higher School of Fine Arts of Athens from 1923 till 1929 under Georgios Ioacovides , Spyridon Vicatos and N. Lytras. Throughout his studies he worked on drawings and sketches for the newspapers “Eleftheros Typos” from 1923 till 1924 and “Elliniki” from 1925 till 1929. In addition he worked as illustrator for the Great Greek Encyclopaedia. In 1930 Victor Ioannides returned in Limassol, where in 1936 in collaboration with George Fasoulioti, they founded the “Studio”, the first ever workshop of interior design and advertising in Cyprus. Moreover he worked for the comic newspaper “Laughter” as chide editor and sketcher. He was an active member of the cultural life of Limassol. His work has been shown in one-man exhibitions: in 1951 at British Institute in Limassol; in 1956 and 1958 at Enosis Club in Limassol; in 1958 at Ledra Palas Hotel in Nicosia; in 1961, 1965 and 1971 at Limassol Town Hall; in 1961, 1963, 1967, 1968, 1969, 19710 and 1972 at Ledra Palas Hotel in Nicosia; in 1973, 1976, 1977, 1979 and 1980 at Curium Palace Hotel. Following his death two exhibitions were organized: one retrospective exhibition at Argo Gallery in Nicosia and one at the Curium Palace Hotel in Limassol. In 1963 he represented Cyprus at the Biennale of Alexandria. He took part in several group exhibitions of Contemporary Cypriot Art in Cyprus and abroad and in the Pan-Hellenic exhibitions from 1960 till 1973. He received the Gold Metal for Painting at the International Flower Exhibition and in 1984 he was honored with the Gold Metal of the city of Limassol for his artistic contribution.
Loucas GERALIS