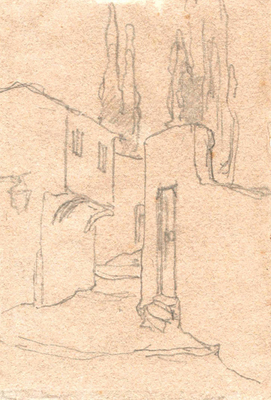 Street with Houses
pencil on paper

Nikolaos Gysis was born in Sklavochori, Tinos in 1842. In 1850 his family moved to Athens. Very early on in life Gysis showed an aptitude for art and even though the proper age for admission at The Athens School of Fine Arts was 12 years old, Gysis was admitted at just the age of 8 as an observer for the first four years, and as a student after that until the age of 22 (1864).   In 1865, thanks to efforts by his artist friend, Nikiforos Lytras and interest by a wealthy sponsor, Nikolaos Nazos, Gysis obtained a scholarship to attend the Munich Academy of Art where he studied under Karl von Piloty. In 1873, Gysis returned to Athens and then toured Asia Minor together with Nikiforos Lytras. He returned to Munich in 1874 after collecting material to further his work.   In 1880, Gysis was made an honorary member of the Academy of Fine Arts of Munich. In 1882, he received a diploma of recognition and a medal from King George I of Greece. The following year he became a professor at the Munich Academy where he attained tenure six years later. Many other honours followed.   His works can be found in museums in Greece such as the National Gallery, the Benaki and the Museum of the City of Athens, in museums in Germany such as the Neue Pinakothek, in Munich and in Australia in the National Gallery of Victoria, Melbourne and in important private collections.
Nikolaus GYSIS