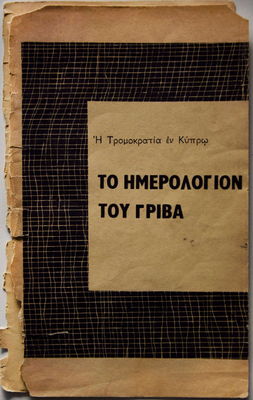 .
Extremely Rare – This book was printed in the Greek language in Cyprus in 1957 by the colonial ”Cyprus Government Printing House” and contains extracts from the captured Grivas Diaries.
It was printed in Greek and aimed at the Cypriot population as part of a propaganda against the Cypriot struggle for independence from the British.
Originally this was published in the English language in 1956 and contained translated extracts from the diaries and Issued by Authority of The Secretary of State for the Colonies to illustrate the growth of the terrorist campaign, organization, methods and internal and external relationships.
PUBLISHER
Cyprus Government Printing House
YEAR
1957
NOTES
First Greek language edition
70 pages