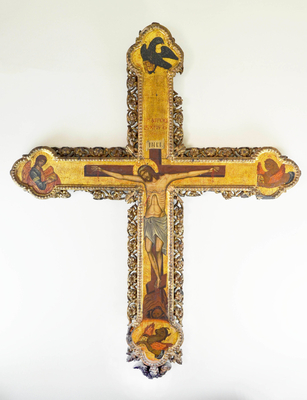 An Extremely Rare Greek Crucifix possibly from Asia Minor. This Crucifix originally crowned the iconostasis, leading to the altar of a Greek parish church, c. 1750. This Cross formerly adorned the top of a church iconostasis, most likely in Asia Minor. The manner of the painted work is characteristic of painting from that region. Iconographic and stylistic characteristics date the work to the 18th century. The carved wooden intertwining foliage with daisies and palmettes similarly dates to around 1750 and is similar to baroque, carved wooden artwork found in the churches of Asia Minor (ref. to: Makris K, Greek folk and post-Byzantine wood carvings, Athens 1962). The wooden carving also consists of an inner outline of round bead like forms encircling the cross. At the lowest point of the cross a carved winged angel can also be seen. All the wooden carving was gold-plated using the polished gold method. The Crucified Christ is exquisitely rendered in a sensitive manner expressing a sense of fragility. Christ’s body is painted using broad strokes of dark olive-green and pale ochre flesh tones. His lower body is draped in a muted turquoise cloth. Christ’s head is crowned in a wreath of thorns. His crowned head is set within a gold halo, which reads the letters ‘Ο, Ω, Ν’. Crucified Christ is portrayed on a brown cross, on a gold background, over a rock where a small cave is depicted, revealing the skull and two bones of his ancestor Adam. Atop the cross is an open scroll which reads the western influenced inscription: I.N.V.I. instead of the Orthodox inscription: Ο ΒΣΛΣ ΤΗΣ ΔΞΣ (The King of Glory). Above the cross, on the gold background of the upper arm of the cross, we read the title inscription: Η ΣΤΑΥΡΩΣΙΣ ΤΟΥ ΧΡΙΣΤΟΥ (THE CRUCIFIXION OF CHRIST). On each of the crosses’ trilobes we can see depicted symbols of the four evangelists, as follows: John the Evangelist as an eagle carrying the fourth gospel, his head set in an inscribed halo.Mark the Evangelist as a winged lion carrying the second gospel, his head set in an inscribed halo.Luke the Evangelist as a winged ox carrying the third gospel, his head set in an inscribed halo.Matthew the Evangelist as a winged man carrying the first gospel, his head set in an inscribed halo.
Fotos HADJISOTERIOU