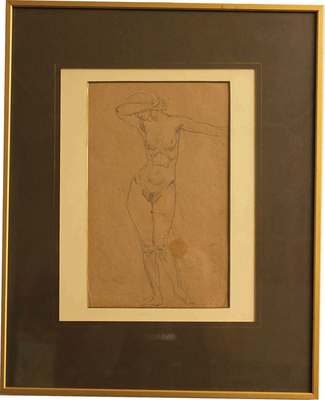 Georgios Gounaropoulos, (1889 – 1977) A pioneer artist of the Paris School. His work was better understood and accepted due to the immense impact of Constantinos Parthenis. One cannot fail to notice a spiritualism, idealism and a surrealistic character in his oeuvre, but at the same time an inherent Hellenic identity in common with most contemporary Greek artists. Fred Neukomm (1905-1989) Fred Neukomm was a graphic artist who established his studio in Paris and later Basle with great success. His clients included such household names as Knorr, Nestle and Ford. He collaborated with Gallery Vavin in the marketing of his artists. As a result, he hand-picked some of the artists he liked most and created a personal collection which included the artists Bores, Vines, Gounaropoulos, Campigli and Facini. The whole collection was disposed in auction by Phillips, London on the 26/6/1989.
Giorgios GOUNAROPOULOS