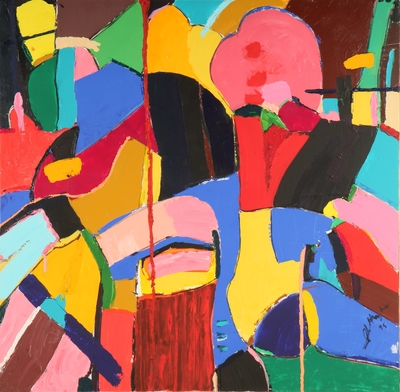 The work is registered with the Glyn Hughes Archives and accompanied by a certificate of authenticity.

Glyn Hughes was born in Wales in 1931 and studied Fine Art at Bretton Hall in Yorkshire. He moved to Cyprus in 1956 to teach. In 1960, together with Christoforos Savva, he founded Apophasis, the new republic's first gallery. In 1971 he created Synergy, an event that combined conceptual and environmental art that took place every year until 1974. In 1975 he started a fruitful partnership with the German theatre producer Heinz Uwe Haus (in Cyprus and abroad), and with The Theatre Organisation of Cyprus. He has designed sets and costumes for modern stage productions in Cyprus, Athens, Thessaloniki, Epidaurus, Kalamata, Edinburgh, Berlin and the USA. He has lectured both in Nicosia and Athens on Cypriot art, Berthold Brecht, William Hogarth, German Expressionism and other subjects. He has exhibited in solo shows in Athens, London, Germany, Switzerland and Cyprus. His work can be found in many public and private collections in Cyprus. Notably at The State Gallery of Contemporary Cypriot Art, The Limassol Municipal Gallery, The Bank of Cyprus Cultural Centre Foundation, The Central Bank of Cyprus Art Collection, The Hellenic Bank Cultural Centre, The Archibishop Makarios III Foundation-Cultural Centre and The Costas & Rita Severis Foundation.
Glyn HUGHES art