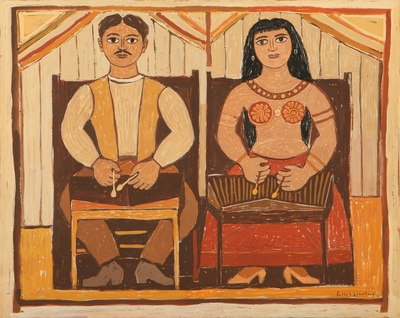 The musicians
oil tempera on paper

Previous owner of lots 1,3,4,5 Vasiliki (Eva) Topping was born in Fredericksburg, Virginia on the 23rd of August 1920. Her mother Catherine Poulizo Catafygiotu was from Porti, Thessaly and her father Themistocles Kataphiotis was from Trikkala, Thessaly. Eva was the oldest of three children. Reading and appreciating music and the arts were all daily events of the Catafygiotu household. An accomplished musician Eva played the violin and piano. Eva Topping was a graduate of James Monroe High School and obtained a Bachelor degree from Mary Washington College in 1941. A Masters degree in Classics from Radcliffe College followed in 1943 and she immediately went on to Harvard University where she worked towards a Ph.D. During the school year of 1944-1945, Topping taught Greek and Latin at Wheaton College in Wheaton, Illinois. In 1947-1948, Topping taught the same subjects at Buckingham School in Cambridge, Massachusetts. Soon after Topping received a Fulbright scholarship and studied at The University of Athens and The American School of Classical Studies. She met her husband Peter W. Topping in Greece whom she married in 1951; the couple had one child Dr. John Themis Topping. After eight years in Greece the Topping family returned to the United States. From 1976 to 1978, Eva Topping was a lecturer in Modern Greek at the University of Cincinnati. It was during this period in Cincinnati that Topping first began to write a series of journal articles on Greeks who resided in North America during the Nineteenth Century. It was from this impressive series of articles that the American public first learned, in depth, of notable nineteenth century Greek-Americans. On September 26, 1992, Eva Topping was honoured at The Hellenic Spirit Foundation in St. Louis Missouri for her “exemplary achievements in her field as lecturer, writer and educator.”
Theodoros STAMOS