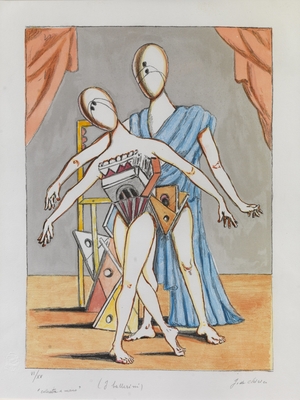 De Chirico was born in Volos, Greece in 1888 to Italian parents. He studied art at The School of Fine Art, Athens, under the influential Greek painters Georgios Rolios and Georgios Jacobides. After the death of his father the family moved to Munich, where De Chirico studied for two years at The Academy of Fine Art. In Munich he became interested in philosophy, and in the writings of Arthur Schopenhauer and Friedrich Nietzsche. Early in his career De Chirico was inspired by the European symbolism movement, particularly Arnold Böcklin and Max Klinger. He returned to Italy in 1908 and settled in Florence. His earlier works combine a Symbolist sensitivity and an attempt to express the strong and mysterious feeling he had discovered in Nietzsche’s writings. He painted his first metaphysical painting, “Enigma of an Autumn Afternoon” in 1910. He first exhibited his works at the Salon d'Automne, Paris in 1912. In 1913 during an exhibition at the Salon des Indépendants, Picasso and Guillaume Apollinaire noticed his work. During The First World War he met the artist Carlo Carra, together they define the Metaphysical painting style. In the meantime, his works were greatly admired by the new Surrealist school of artists and writers, who were fascinated by dream analysis and the subconscious mind. De Chirico exhibited all over the world. His works are extremely sought after and can be found in notable private and public collections such as The Metropolitan Museum of Art, New York, Guggenheim Museum, New York, Museum of Modern Art, New York, Tate, London and all major Italian Art Museums.
Katy STEPHANIDES