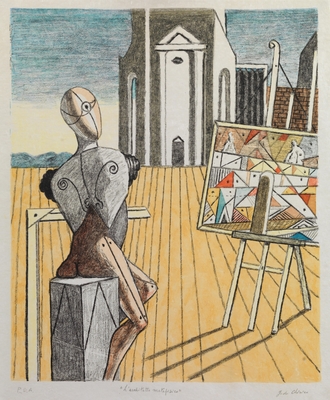 ‘I paint what I see with my eyes closed’ Giorgio de Chirico De Chirico was an Italian painter, sculptor, theatrical designer and writer. He founded the “scuola metaphysical " art movement which influenced the surrealists. During The First World War he met the artist Carlo Carra, together they define the Metaphysical painting style. In the meantime, his works were greatly admired by the new Surrealist school of artists and writers, who were fascinated by dream analysis and the subconscious mind. The Greek painter Nikos Engonopoulos was greatly influenced by De Chirico. De Chirico exhibited all over the world. His works are extremely sought after and can be found in notable private and public collections such as The Metropolitan Museum of Art, New York, Guggenheim Museum, New York, Museum of Modern Art, New York, Tate, London and all major Italian Art Museums.
Kostas AVERKIOU