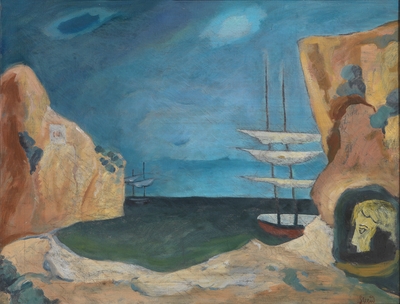 Gerassimos Steris was born on the island of Cephalonia. During his early years his family lived primarily in Egypt and Italy. He attended the Greek-French Lycée in Alexandria. In 1915 he enrolled at The School of Fine Arts, Athens and attended classes until 1917, under Dimitrios Geraniotis and Georgios Jakovides. He travelled extensively in Europe and lived in Paris from 1919 to 1926. There he continued his studies at the Académie Julian amongst the likes of Picasso, Derain and other artists. In 1926 he returned to Greece, where he graduated from the School of Fine Arts and was awarded a three-year scholarship from the Voltos Bequest to continue his studies in Paris. After his return to Paris he studied philosophy and psychology at the Sorbonne and fresco and interior architecture at the École des Beaux-Arts. In Paris, working from his own studio, he met gallery owner Manolis Segredakis, who became the prime supporter of his work. In 1931 after returning to Greece, he held his first solo exhibition, which left critics divided. In response to a negative review by Zacharias Papantoniou, seventeen critics voiced their support for the exhibition. This was called: 18 κριτικά άρθρα γύρω από μία έκθεση (An Exhibition’s 18 Critique Articles). The critics included Fotos Politis, Spyros Melas, Dimitris Pikionis, Stratis Doukas, and Christos Karouzos. It is considered to be the manifesto of modernism in Greece. In 1932 he worked with Pikionis on stage sets for the Kentrikon theatre in Athens and in 1935 worked with Fotis Kontoglou on restorations at Mystras. In 1937 he moved to the United States and held a solo show in New York. From 1937 he worked in Hollywood for big American film-making companies for the design of publications and posters. He travelled throughout the American continent under the name George de Steris. In 1939 he decorated the Greek pavilion at the New York World Fair with four large murals depicting Greece history. Ten years on, in 1949 he became an American citizen under the name Guelfo Ammon d’Este. Between 1950 and 1965 Steris taught painting. In this period he painted frescos for the Orthodox Cathedral of New York and the Orthodox church of the Holy Trinty in Lowen, Massachusetts. From 1965 to 1975 he taught at the Traphagen School. In 1980 together with his wife Anna Vassalo Savino, he moved to Nice, France where they remained until 1985. In 1985 he returned to New York where he died two years later. Although Greece had lost track of him since the early Fifties, he had held a number of one man shows, namely Nees Morfes in 1969, the Macedonian Art Society in 1970 and Trito Mati in 1978. Presentations of his work took place at the Sculpture Gallery of Munich in 1980 and the National Gallery of Athens in 1982. In 1991 the Municipal Gallery of Thessaloniki organised a posthumous retrospective in his honour which was also exhibited in Athens, at the Melas Mansion the following year. He is considered to be one of the forerunners of Greek modernism. The thematic and plastic freedom of his painting, the symbolic extensions and references to metaphysical art, created a split in Greece in the interwar years. Through objectivity and mythological excess and a dialogue with classical aesthetics, Steris expresses the magical realism of a mythological world, connecting, in some instances, Greek art with European modernism. His work can be found in The National Gallery of Greece, The Municipal Gallery of Athens, The Averoff Gallery, The Leventis Gallery, The National Bank of Greece and many other public and private collections.
Georgios HATZOPOULOS