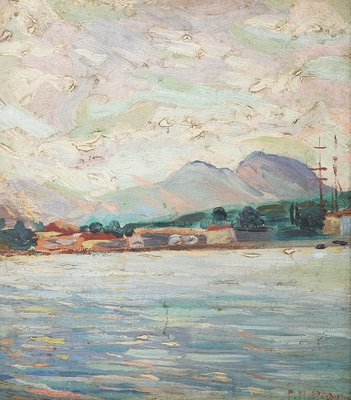 Georgios Roilos studied at The School of Fine Arts, Athens from 1880 till 1887. He studied painting under Nikiforos Lytras and etching under A. Rovertos.

Later in 1888 on a scholarship from the Kritsis Bequest, he studied at the studio of Nicholaos Gysis at The Royal Academy of Fine Arts in Munich.

A year later he moved to Paris and continued his studies at the Académie Julian under J. P. Laurens and B. Constant. In 1894 he returned to Greece permanently.

From 1895 until 1903 he held a teaching position at The School of Fine Arts, Athens.

In 1904 he moved to London for four years. Later, two years after returning to Athens he took up another teaching position at The School of Fine Arts, Athens. He retired in 1927.

His work, like that of peers of the period, is defined by academism with influences from nineteenth century French realistic and impressionist movements. He is one of the first Greek painters who depicted Greek nature and its atmospheric variations with poetic feeling.

Roilos held a number of solo exhibitions in Athens and participated in a number of prestigious group exhibitions such as the 1889 Exposition Universelle in Paris and an exhibition at The Royal Academy, London in 1905.

His work is found in many public and private collections, notably: The National Gallery, Athens, The Athens Municipal Gallery, The Leventis Gallery, Nicosia, The Koutlides Collection and The National Bank of Greece collection.
Spyros VASSILIOU