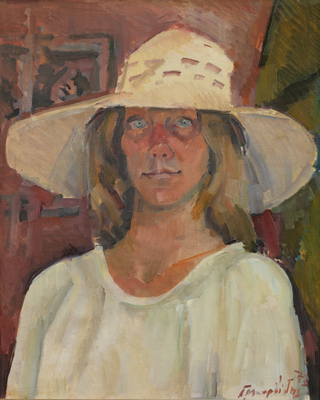 Georgios Mavroidis was born in Piraeus in 1912. He spent his childhood in Larnaca, Cyprus, the birthplace of his father. He maintained a close relationship with the island throughout his life.

He studied law and political sciences at The National and Kapodistrian University of Athens. In 1946 he entered the Diplomatic Service of the Ministry of Foreign Affairs and was stationed firstly in Paris, then in Trieste.

He painted Greek cultural life without any formal painting education. He was a founding member of the art group Armos through which he exhibited his work from 1948.

Although his work appears to have certain common characteristics with the art of his generation, it differentiates itself through its use of bold colour and freedom of expression in form. His visually stimulating expressionist gestures highlight the work’s psychological dimension. However, his most characteristic personal idiom is the shaping of form expressed through vigorous, dynamic brushstrokes. This is executed in a way which often has a distorting effect, but is without disintegrating the image structure. His subject matters included landscape, still life and portraiture of many friends and personalities.

Mavroidis held many solo shows in Greece, Cyprus and other European cities as well in New York. He also participated in a number of prestigious group exhibitions such as the 1955 and 1957 Sao Paolo Biennale, the 1961 Alexandria Biennale and the 1966 Venice Biennale. In 1986 The National Gallery, Greece exhibited his first large scale retrospective.