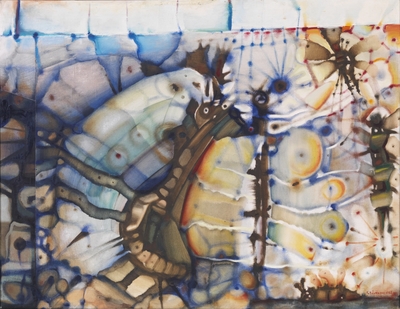 Georgios Derpapas was born in Katerini, Central Macedonia in 1937. At the age of twenty he moved to Hamburg where he studied political and economical sciences. He later returned to Greece and from 1960 onwards devoted himself fully to painting. In his early work one can observe the influence of Surrealism and the imaginative spirit of the Vienna School. In these works Derpapas demonstrates his great draughtsmanship and painting skills, through a combination of realist and abstract distortion of his subject matter. From 1964 onwards he expressed himself strongly in colour, using oil on canvas or panel. His vivid use of colour and poetic brushstroke are prominent features in this lot. Derpapas has held many solo exhibitions in Greece and internationally, such as in 1964 at ‘Tillybs’, Hamburg and ‘Die Insel’, Manheim. His work can be found in The National Gallery of Greece, The Municipal Gallery of Athens, The Macedonian Museum of Modern Art, The National Bank of Greece, and many other public and private collections.
Andreas KARAYIAN