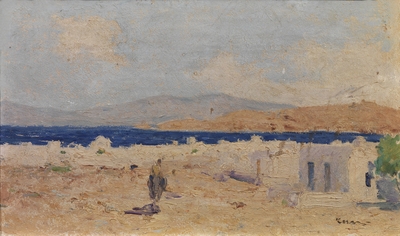 Mykonos
oil on board

Cosmadopoulos was born in Volos and studied painting at The School of Fine Art in Leipzig, Germany and The Grande Chaumière of Paris. In 1926 he presented his work for the first time in Greece and abroad. Later in 1936 he was awarded The Silver Medal of The International Exhibition of Paris. He also participated in The Venice Biennale of 1934 and 1936. He presented his work in many national and international shows. Cosmadopoulos’ themes include portrait, landscape and compositional. His style moves between realism and impressionism. Mykonos, is made up of small sharp strokes of colour in a way where realism and poetry merge harmoniously. His work can be found in The National Gallery of Greece, The Municipal Gallery of Athens, The Municipal Art Gallery of Rhodes, The Leventis Gallery and many other public and private collections.
Renos LOIZOU