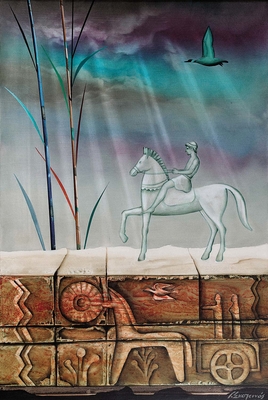 Giorgos Skotinos studied drama between 1961 and 1964, at the Drama School of The National Theatre of Greece. At the same time, he attended painting classes at The Athens School of Fine Arts. Between 1964 and 1967 he continued his studies in New York, in cinematography and film editing at the Visual Art and Movie Subscription Group. His art has its roots at the very birth of his country and its development traces his links with the historical facts of life there. Although Giorgos Skotinos drew and painted as a child, it was during his early twenties that his work developed a distinct distancing from other Cypriot artists. This occurred when, at the age of nineteen during the struggle for liberation (1955-59), he was sent to England as a prisoner. He had his first lessons in painting and ceramics while interned at Wormwood Scrubs and Wakefield prisons. After his release in 1959, he went on to study Art and Drama in Athens and cinematography in New York, before returning to his birthplace, Famagusta. Following the Turkish invasion of 74, he was forced to leave much of his work in his studio in Famagusta. Skotinos distinguished himself in a number of artistic competitions. His series «Cycle of Protest» which was exhibited in many countries abroad and expresses the artist’s protest against the Turkish invasion of Cyprus, has received critical acclaim. Skotinos has held many solo exhibitions in Cyprus and Greece. Additionally, he has participated in many prestigious group exhibitions such as the 1967 Paris Biennale, the 1968 Alexandria Biennale, the 1968 Venice Biennale, the 1969 Sao Paolo Biennale and the 1969 and 1982 New Delhi Triennale.
Michail DORIS (PAPAGEORGIOU)