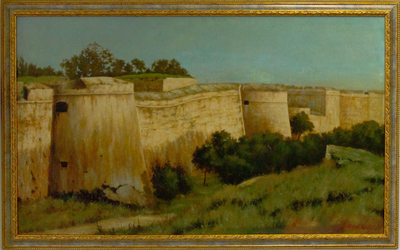 Venetian walls of the old city of Famagusta
oil on board

Solomos Frangoulides was born in Pano Zodia in 1902. He studied at the School of Fine Arts of Athens from 1924 till 1932. His teachers were G. Iakovides, N. Lytras, Sp. Vikatos, G. Roilos and P. Mathiopoulos. He excelled in all the exams through his studies. After his graduation he returned to Cyprus for two years for the hagiography of a Church in the village of Agros. In 1934 he returned to Athens and worked as a designer. During the Second World War he participated in the resistance against the Germans, by preserving a printing office in his room. In 1947, before the Civil War, he went back to Cyprus, where he lived until his death in 1981. Frangoulides worked on various icon-paintings for several churches in Cyprus. He also painted portable icons combining the Italian and Byzantine type of icon painting. Moreover, he wrote art reviews in newspapers and magazines. He exhibited his work in several solo and group exhibitions. Some of his solo exhibitions were in 1936 at Parnassos of Athens, in 1937 at Flerianou hall in Athens, at Costantia Hotel of Famagusta in 1953, at the Spiritual House of Nicosia in 1972 and at Cumberland Hotel in London in 1986. After his death, a retrospective exhibition of his work took place at Gloria Gallery in Nicosia. Some group exhibitions he participated in were the Pancyprian Exhibition in 1932, the Panhellenic Exhibitions in 1933, 1940 and 1941. Also, at Salon d’ Art Moderne in Paris, 1961, at the Exhibition of Cypriot Art organized by the Socialism Institute in London and Edinburgh and at the Biennale d’ Art Sacra at Foggia of Italy where he was awarded with the silver metal His work can be found in several public collections in Cyprus: at the State Gallery of Contemporary Cypriot Art, at Famagusta Municipal Gallery and at the Embassy of Greece in Cyprus. In Greece his work can be found at the Ministry of Culture and at the City Hall of Messolonghi. Also his work can be found in Russia at the Pouskin Museum of Moscow. In his will he left his personal collection to the Greek State. Bibliography includes: - Greek Painters, Melissa publications, Athens 1976 Christos Savvidis-Trichas, Cypriot Artists, Chr, Andreou publications, Nicosia 1982-83 Chrysanthos Christou, Short History of Modern and Contemporary Cypriot Art, Nicosia 1983 Eleni Papademetriou, State Gallery of Contemporary Cypriot Art, Ministry of Culture, Culture Services, Nicosia 2002 Eleni Nikita, Cypriot Artists, First generation, Cultural Center of Popular Bank, Nicosia 2002.
Solomos FRANGOULIDES