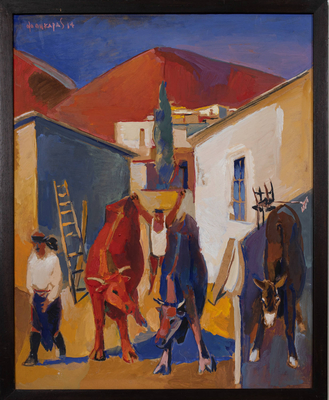 Oxen
oil on board

Christos Foukaras was born in Kissonerga in 1944. From 1970 until 1976 he studied art at the Sourikov Institute of Fine Arts in Moscow. The first two years he studied painting at a workshop and the next four years he specialized in monument painting at the studio of Professor of Claudia Alexandrova Toutevol. He obtained his Master of Arts in 1976. The following year he worked in Athens. The same year Ora Gallery in Athens exhibited a series of his works inspired by the events of 1974. From 1977 he has been living permanently at Kissonerga. He works as an art teacher in Secondary Schools. Some of his one-man exhibitions took place in 1972 at the Patrice Lumumba University in Moscow, in 1976 at Ora Gallery in Athens, in 1977 at the Municipal Culture Centre in Syros, in 1979 at Zygos Gallery in Nicosia, in 1980 at Kyklos Gallery in Paphos, in 1981, 1983, 1990 at Gloria Gallery in Nicosia and in 1994 at Apocalypse Gallery in Nicosia. Christos Foukaras participated in many group exhibitions of which the most significant are: in 1978 in Thessaloniki, in 1981 at the touring exhibition in Budapest, Prague, Berlin and Sofia, in 1987 in Athens, in 1989 in Kuwait and Moscow, in 1990 in Paris and London and in 1996 at Cairo. Bibliography: “Cypriot Artists”, Chr. Andreou Publications, Nicosia 1982-83 – Chrysanthos Christou, “Short History of Modern and Contemporary Cypriot Art”, Nicosia 1983 – Eleni Papademetriou, “State Gallery of Contemporary Cypriot Art”, Ministry of Education and Culture, Cultural Services, Nicosia 2002.
Theodosis THEODOSIOU