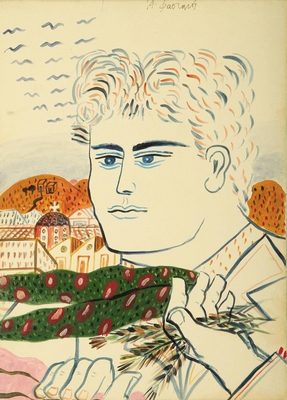 Fassianos was born in Athens. He studied the violin at The Athens Conservatory and painting at The School of Fine Arts between 1956 and 1960 at the studio of Yannis Moralis. Between 1962 and 1964 he attended courses on lithography at the École des Beaux-Arts in Paris with Clairin and Dayez, on a scholarship from the French government. In 1966 he moved to Paris, and since 1974 has lived and worked between Paris and Athens. Since his first solo show in Athens in 1959 he has had more than seventy further solo shows in Athens, Thessaloniki, Paris, Munich, Tokyo, Hamburg, Zurich, Milan, Beirut, Stockholm, London and elsewhere. He has also dealt with engraving, poster design and theatre set design, working primarily with the National Theatre of Athens. He has also published his own texts, prose and poetry. The characteristic style of Fassianos was formed in the early 60s. He draws his subjects from Greek myths, Fayum portraits, Byzantine icons and the shadow theatre. His figures are known for their voluptuousness and the luminosity of colour, highlighting the sensuality and the immense pleasure of everyday life.
Valias SEMERTZIDES