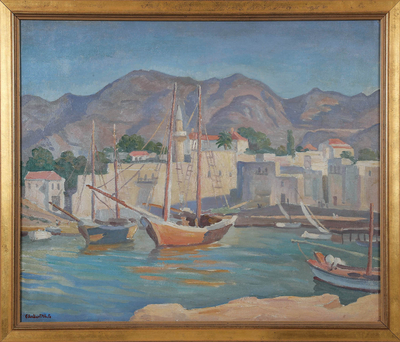 Kyrenia Harbour
oil on canvas, circa 1950

Ethelbert White was an early member of the Society of Wood Engravers and a founding member of the English Wood Engraving Society in 1925. He also worked in oils and watercolour. He was a member of the Royal Watercolour Society, and exhibited regularly at the Royal Academy. According to records Ethelbert White visited Cyprus for the first time in 1935 and stayed some time on the island. White depicted various sites of Cyprus in his paintings both inland and by the coast including Kyrenia. One of his paintings of the harbour of Kyrenia was used for a poster by the British Government to promote tourism in the then British colony of Cyprus. Paintings by Ethelbert White can be found in the Costas & Rita Severis foundation collection as well as many museums and public art galleries.
Michael KASHALOS