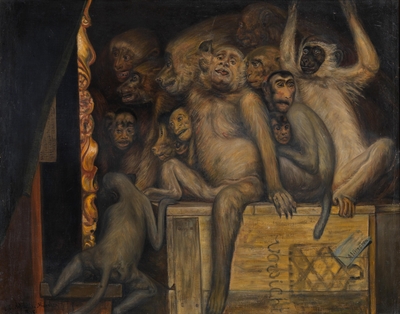 Monkeys as critics
oil on canvas

Elias Adjitiris was born in Smyrni in 1872 and was the son of a merchant. He was admitted in the Academy of fine Arts, Munich in 1893 and studied nature under Nikolaos Gysis. His only surviving works are copies of famous artists such as Raffaello, Rembrant, Caulbach, Rieder etc. He exhibited these works at the large group exhibitions of Glaspalast. Works in public collections: Koutlidis Collection, The National Gallery, Greece. This work is after a painting of Gabriel von Max (1840-1915), the original in Neue Pinakothek in Munich. Monkeys as Critics was presented by Gabriel von Max at the first Munich Annual Exhibition opened on 1st of July 1889. Thirteen apes of varying shapes, sizes, and characters examine a painting visible to the viewer only by its golden frame. A label on the back of the canvas identifies the concealing image as Tristan and Isolde, and lists its selling price as 100,000 DM. The work has been traditionally interpreted either as an expression of the artist's well-known fascination with Darwinian philosophy or as a satirical attack on art critics. The painting was among the most cynical at the exhibition and ultimately the picture must be read as a satire on the jurors. A tremendous popular success at the exhibition, the work was ironically, awarded a second-class gold medal.
Georges COSMADOPOULOS